I love paper, its texture, its grain, its aliveness. Some I love because of its body; some its lack of body, its transparency. And some times I just need to play with paper, exploring its physicality, how it folds, or drapes itself; how the light plays with it. Yesterday was that kind of day.

I am taking a holiday and will be back next week-end. As Fiona would say "Go well" and see you next week.

Posted by Liz Davidson / Artist Notebook at 6:58 AM 4 comments:

A group in the village are putting together photos of what the village used to look like and asked us if we had any old photos of the house from when we moved in in. It was great fun going back and trying to find the photos. So this was February or March of 1974, a snow less winter, rather like this one. But what really stuck us was how young we were and how much work there was to do. Not that that bothered us, we had loads of energy and knew anything was possible. Not knowing a thing about old houses, renovations, plumbing, electricity, cabinetry didn't seem to bother us in the least. After all we had a book, "Architectural Standards", which we didn't really understand but the pictures were helpful!

Where the white clapboard starts was the summer kitchen, which became our kitchen and the green buggy doors to the right went into my studio. The summer kitchen and attached barns were 65 feet long and to two young artists space for studios, the selling point of the house.

The barn and house from the other side complete with a 3 seater outhouse. J's studio was in what was the cow stalls and hay loft above. In those days we could see across the valley. Now there is the thicket of birch  and pine. [link here]
Posted by Liz Davidson / Artist Notebook at 6:59 AM 4 comments:

Tidying up my files I came across this drawing from a couple of weeks ago. I wondered what I had been thinking and then remembered that I had had a dream of this image. Such a strong dream that I knew I needed to draw it. Was it reading about Wolfgang Laib's exhibition at MOMA [Link here] which I am really hoping to see. Was it reading about the collapse of bee colonies and how that would affect and threaten our future [link here]? It's a strange piece in the midst of all the straight and wavy lines I've been working with. Really don't know quite what to do with it, so for now it rests in its glissine envelope.

Posted by Liz Davidson / Artist Notebook at 6:56 AM 2 comments:

Time For Some Color

Working away last week I decided it was time for some color, so I dug out my soft pastels. I soon realized they aren't quite soft enough for these papers. I tried grinding them up and then applying the powder which was better....but. So the drawing stared at me all week until I started to play with it on the computer. I am loving working with these wavy lines and this drawing made me realize how I am longing for spring; for green, for young tender growth, for the smell of the earth. Soon.


Posted by Liz Davidson / Artist Notebook at 6:50 AM 4 comments:

In Praise Of Shadows

A friend [thanks Tina] suggested this book In Praise Of Shadows by Tanizaki, to me earlier in the week and it's a gem. It's an essay on the Japanese sense of beauty, on all things nuanced, glimpsed at, softened by age and shadows, understated, a quality of silence and fullness. Here is what he says about a room. “Whenever I see the alcove of a tastefully built Japanese room, I marvel at our comprehension of the secrets of shadows, our sensitive use of shadow and light. For the beauty of the alcove is not the work of some clever device. An empty space is marked off with plain wood and plain walls, so that the light drawn into its forms dim shadows within emptiness. There is nothing more. And yet, when we gaze into the darkness that gathers behind the crossbeam, around the flower vase, beneath the shelves, though we know perfectly well it is mere shadow, we are overcome with the feeling that in this small corner of the atmosphere there reigns complete and utter silence; that here in the darkness immutable tranquility holds sway.” 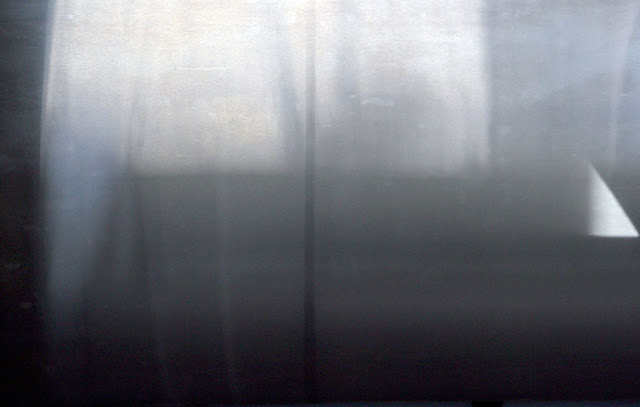 And another paragraph I love. “With lacquer ware there is an extra beauty in that moment between removing the lid and lifting the bowl to the mouth, when one gazes at the still, silent liquid in the dark depths of the bowl, its colour hardly differing from that of the bowl itself. What lies within the darkness one cannot distinguish, but the palm senses the gentle movements of the liquid, vapour rises from within, forming droplets on the rim, and the fragrance carried upon the vapour brings a delicate anticipation ... a moment of mystery, it might almost be called, a moment of trance.” 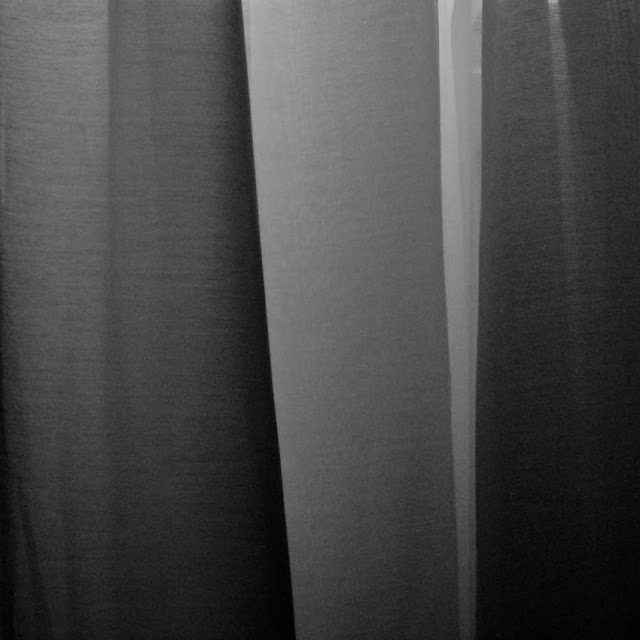 Posted by Liz Davidson / Artist Notebook at 6:58 AM 8 comments:

Email ThisBlogThis!Share to TwitterShare to FacebookShare to Pinterest
Labels: art and artists, books, In Praise Of Shadows, Tanizaki

When It's Not Working

Posted by Liz Davidson / Artist Notebook at 7:06 AM 6 comments:

There is a chair outside the front door where I sit to take a break.  And across the road is a grove of birch, still young, that I stare at. Through this thicket I can see the far field and the bank of the river with a hill behind. A view that is hidden once the trees leaf out. These tall, rather spindly trunks grow every which way, creating beautiful layers. An ordinary view, one you see all about here in southern Quebec, and one that I love. I call it source material.


Another thing I pay attention to when I'm sitting in that chair, is the road itself. There has been a bit of snow for the last few days, and the tire tracks make great patterns where we back out onto the road. Some days they last for hours. Next time I'll get the ladder out to take the photo.


Posted by Liz Davidson / Artist Notebook at 6:54 AM 6 comments:

It's always amazing to me how, when you don't know what to do next, you fall back to something that has worked in the past. Maybe it's just filling in time until the way forward is clearer. Ever since I worked on 'Big Blue' [link here] [and here] I have been fiddling about with different ways to have 2 curved sinuous lines. I'd swear I had a compass that you could put lead in both ends but haven't found it yet. A couple of months ago I borrowed J's flex curves. I forget what I wanted them for but finally had that eureka moment. This is on my thinnest paper, which I am not happy with. It's very soft so the tape pulls up a lot of fiber and when I use layers of fixative the paper and the charcoal become grainy and coarse.

Posted by Liz Davidson / Artist Notebook at 7:01 AM 6 comments:

Don't know whether it's the flu that keeps hanging about or the new papers that I have been experimenting with, but I am floundering about. Trying this, then that. Disliking this, liking parts of that. Definitely not in the flow. Bought some paper, made especially for charcoal, that feels so easy to use; the tape doesn't stick, but it doesn't feel alive and responsive. On the other hand a roll of Chinese drawing paper is so thin, it's like working on tissue paper and has no body. So I scrunched it up to see what would happen. Interesting...

On another Japanese paper [so thin that it tore as I removed the tape] I tore it into strips and re-bandaged it with more masking tape, gluing it down with matte medium.

Bringing it back to the worktable to add some more charcoal, I attached it to the window to see how transparent it was. Very, and then I noticed the grain lines in the paper; beautiful.

Posted by Liz Davidson / Artist Notebook at 6:56 AM 4 comments:

I was so excited the other day to discover the amazing women of Tiébéle in Burkina Faso. Their design sense is superb, and has been passed down through generations of women. They cover the cob structure house with bold geometric patterns, sometime using pictures of animals and precious possessions. This layer of fresh dung and mud is applied to the walls, inscribed, painted, and then varnished with a mixture made from the pods of local tree.

Here are a couple of links to see how the women work. This is a short video, Couleurs de femmes à Tiébélé,  [link here]. And this is a longer video called Traces, Women's Imprints, [link here]. Both are terrific.

Posted by Liz Davidson / Artist Notebook at 6:52 AM 8 comments:

While working on the drawings of stones [link here] I wanted to see how flat shapes would work. I tried some with ink and photographed them, then had a great time playing with the shapes in photoshop. They are playful and fun. A great way to spend Saturday night.

Posted by Liz Davidson / Artist Notebook at 6:57 AM 8 comments:

Had to use some of my Somerset paper as I had run out of my Japanese paper. This paper gives more intense blacks but I am missing the ephemeral feeling I get with the Japanese paper.  The Somerset is a tough paper, ready to put up with any amount of rubbing and smudging and laying down tape and tearing up tape I can throw at it. And I used a lot of tape on this drawing. Almost a whole roll. The drawing kept escaping me. I'd get a glimpse, then loose it. See it again, loose it. Quite a dance. I think it works better when it leads and I follow, but some days I just need to lead.

Posted by Liz Davidson / Artist Notebook at 6:58 AM 4 comments: