We are grabbing every chance to sit outside and watch the sunrise. Some mornings I am in my winter coat and some mornings are just too cold. For the past couple of days though the sunrise has been magnificent. Fog and low cloud roll over the mountain and down into our valley. Then rising, only to come falling down again. Rather like watching the world breathe itself into existence. And so we sit, and watch, and marvel. And drink our coffee.


Posted by Liz Davidson / Artist Notebook at 7:41 AM 2 comments:

Yesterday; final files prepared for 36 coffee cups, so they are ready to print. Then layer [in photoshop] all 36 together. Have a coffee with a friend and bring home 11 more cups. Great day

Posted by Liz Davidson / Artist Notebook at 6:48 AM 10 comments:

After seeing the photos I posted the other day, a friend suggested I try darkening and upping the saturation. So I went back to the originals and did some tweaking. The dish towels are red [I am still not happy with it, bottom photo] but played about some more with color and blue won. Still unsatisfied I rotated Blue, which I feel works better. When I leave behind that which I saw and wanted, ie the luminosity of color, and let what is, play, fun things start to happen. The stripes are much more alive, and I have forgotten that the stripes are formed from the shadows from the chair slats. Still, it's probably for the oops pile. 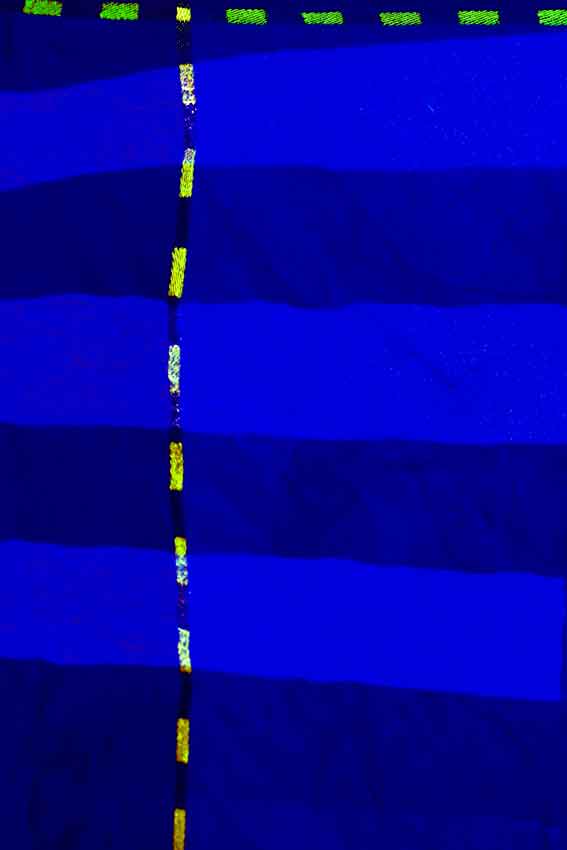 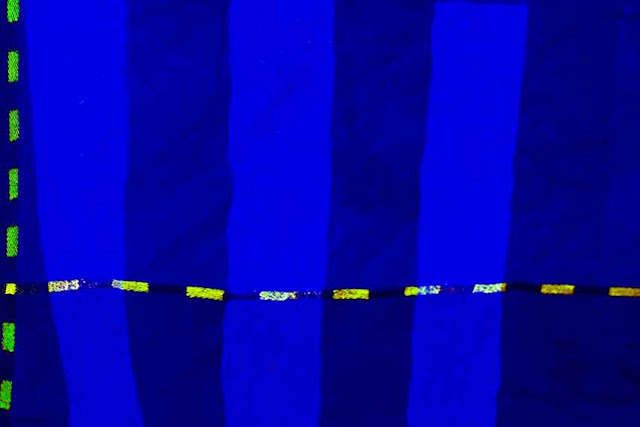 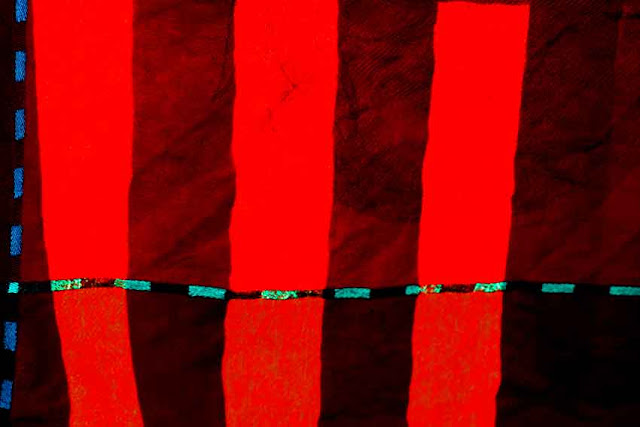 Posted by Liz Davidson / Artist Notebook at 6:46 AM 4 comments:

The dish towels were drying over the back of a chair yesterday when I caught the slanted afternoon light illuminating them. The color was so rich, like stained glass; so it was a big disappointment when I looked at the photos on the computer to see a pale imitation of what had been. Solution to most problems these days seems to be turn it into black and white and see what happens then. Hmmm I like, very graphic, strong. After the coffee cup, stripes? 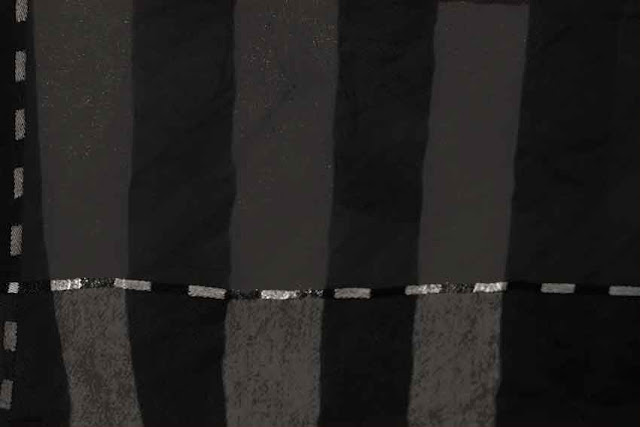 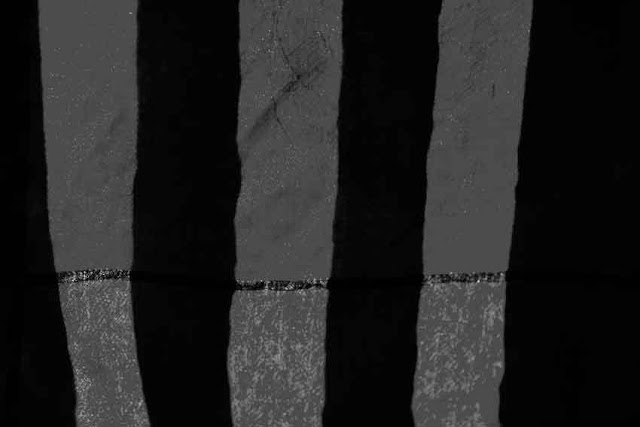 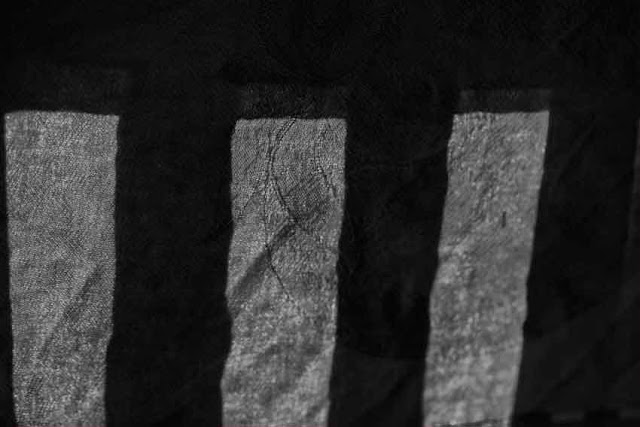 Posted by Liz Davidson / Artist Notebook at 7:11 AM 7 comments:

Email ThisBlogThis!Share to TwitterShare to FacebookShare to Pinterest
Labels: black and white, shades of gray, stripes

At the round earth's imagined corners, blow
Your trumpets, angels, and arise, arise
[From the Holy Sonnets]

Posted by Liz Davidson / Artist Notebook at 6:25 AM 12 comments:

We were having a coffee, in a little cafe that we have never been to before. And this is what I got. Love the way coffee answers all the questions.

Posted by Liz Davidson / Artist Notebook at 6:47 AM 2 comments:

Still experimenting with the coffee skirts, the possibilities seem endless but while I am intrigued by what is happening, no one way has grabbed me. And when I can't "see" anymore I go back to photographing the bottom of the coffee cups. The cafe in the village has been very kind, saving them for me; the only problem is they have been washing them out. I explained what I was doing and now they look at me with big smiles on their faces. Not sure if I haven't just claimed village idiot status.

Posted by Liz Davidson / Artist Notebook at 6:55 AM 4 comments:

We came close to having a frost the other night and when I came downstairs it took me a few minutes [I hadn't had a coffee yet] to figure out what was different. The old windows in the living room were covered with condensation. A job for this week-end. Put on the double windows. I love these old windows and while I know they are not in any way energy efficient, replacing them gets lower and lower on the list. To see more of these old beauties you can click here, and here.

Posted by Liz Davidson / Artist Notebook at 6:56 AM 10 comments:

Answer To The Big Question

That question mark that appeared on my studio wall last week freaked me out. At first I laughed, then all the doubts and questions started. Ending up with the biggies, What am I doing here, WHATS THE MEANING OF LIFE? Decided I was taking myself way to seriously, besides I still can't figure out the answers, even after all these years of asking. So I spent time in the early morning fog, drinking coffee and taking photos of what J. and I call the tree of life. As it came in and out of focus. And the sun rose and the fog was burned off.

Posted by Liz Davidson / Artist Notebook at 6:45 AM 6 comments:

Email ThisBlogThis!Share to TwitterShare to FacebookShare to Pinterest
Labels: Foggy sunrise, meaning of like, questions, sunrise, the tree of life

Working yesterday, pinning cardboard shapes to paper and this is what happened. OK, it was horizontal not vertical, but it did made me laugh. And just to make certain, I added the bottom circle of the coffee cup and I played some more.

Posted by Liz Davidson / Artist Notebook at 6:49 AM No comments:

Spent time cutting more skirts out of cardboard and pinning them to sheets of paper in the wall. The lines have become paths. The delicacy of the line that I first fell for, in the bottom of the coffee cups, is lost, but I like the strength of the paths, Also love the cardboard. Now; do I use the out lines.... the cardboard.....cut the lines out of left over plywood. Or, none of the above.

About the Coffee Cantata, here is what Wikipedia says" (BWV 211) is a secular cantata written by Johann Sebastian Bach between 1732 and 1734. Although classified as a cantata, it is essentially a miniature comic opera. In a satirical commentary, the cantata amusingly tells of an addiction to coffee, a pressing social problem in eighteenth century Leipzig, where this work was premiered. The cantata's libretto (written by Christian Friedrich Henrici) features lines such as "If I can't drink my bowl of coffee three times daily, then in my torment, I will shrivel up like a piece of roast goat"—a sentiment that would likely have been appreciated by the patrons of Zimmermann's Coffee House in Leipzig, where Bach's Collegium Musicum, founded by Georg Philipp Telemann in 1702, would have originally performed the work."

Posted by Liz Davidson / Artist Notebook at 6:25 AM 4 comments:

Started taking apart the coffee cups thinking it was the bottom circle with the lovely stains that I wanted. So I unrolled the top rim, split the side seam, and managed to separate the bottom from the sides without to much damage and voila I had the pattern pieces. Surprisingly it was the side piece that has me intrigued. It looks like a pattern for a skirt. Hmmmn, will it form an interesting circle? No, on to plan B.

Posted by Liz Davidson / Artist Notebook at 6:42 AM No comments:

Definitely over caffeinated, circles everywhere. Quiet, calm was what I had in mind. Started out that way but then the rocket fuel kicked in. Let's try this, let's try that, mind and body whirling. Oh yea, it's the beginning, things will calm down. Or maybe they won't. 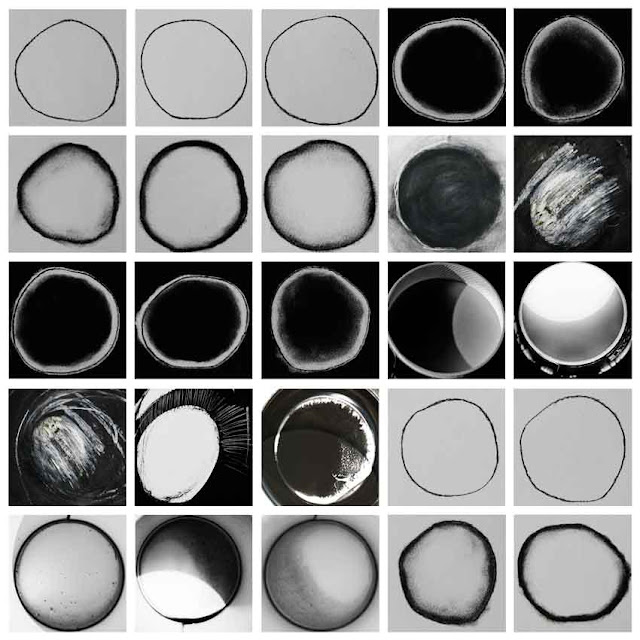 Posted by Liz Davidson / Artist Notebook at 6:57 AM 6 comments: